Masters and owners have an obligationto provide a safe workplace. Heavy seas and raging winds try to defeat any attempt to be 'safe'. However, if a loose anchor is pounding the hull, or unsecured nylon lines on deck threaten to wash overboard and potentially tangle in the ship's propeller, the Master must make a decision whether the potential danger to the ship outweighs the high risk of sending crewmembers on deck.

If the decision is that work on deck is necessary, procedures must be completed for a full risk assessment. Reference to the Member's ISM guideline and the Code of SafeWorking Practices for Merchant Seaman (Consolidated Edition 2014 is reproduced in this article), should be considered. Although this code originates in the UK, the practical advice should be reviewed by any Master or crewmember, so unexpected dangers can be planned for.

While transiting the North Sea in heavy weather, the Chief Engineer notified the Master of leaking water of the engine room emergency escape hatch cover on the aft mooring deck into the steering flat. The hatch cover was secured on from the inside with chain blocks. But there was concernthe coiled mooring lines on the aft deck may have become loose. The Master visibly (from a safe stairwell) confirmed loose nylon mooring ropes adjacent to the hatch cover. At this point he became concerned if the nylon lines were washed overboard,they may become entangled in the ship's propeller.

The bosun and an AB volunteered to go on deck to secure the lines. The Master's plan had them both donning life jackets and a safety harness, with firefighterís lifelines attached to the harnesses and the other ends to handrails on two external stairwells. Slack in the lifelines would be manually taken up by the Master and another AB on one stairwell, and the Chief Officer and the Chief Engineer on the other.

As the bosun and the AB proceeded with the work, a large wave on the aft mooring deck washed both men overboard, causing all four crew manually holding the lines to lose their grips. As a result, the lifelines parted and the two crew were adrift in the heavy seas. Unfortunately, the sea condition made the option of turning vessel around too dangerous, and both men were lost.

Some of the conclusionsIncident # 2: Unsecured empty cans on deck

Soon after departing San Juan, PuertoRico, on route to Port Elizabeth, New Jersey, the subject ship prepared for heavy weather predicted to hit the nextday. The winter storm was a large system affecting most of the US EasternSeaboard.The Master issued a list to the deck department of items to be secured on deck, or moved to safer quarters.There was no mention of trash cans.

Early morning on the third day at sea,the Master secured the deck at 06:30hrs due to the heavy weather conditions restricting crew members access. At 09:00hrs he instructed the Chief Officer to secure garbage cans inside a newly acquired 20 foot container placed on deck.There were also several empty cans on deck strapped to a cradle that were to be restowed in the container. (The ship had no trash incinerator or compactor, so garbage was placed in cans in the container, for discard at next port.)

The Chief Officer, the bosun, and two ABs started their task as the weather began to deteriorate. The door to the container was opened and latched with a small chain over a slightly bent 1º inchhook.The Chief Officer soon sent one of the ABs to get rope to better secure the open door.The bosun and the other AB were inside the container securing the cans. The Chief Officer was concerned the door would slam shut so he left the container to check the latch. As he did so,the door swung free knocking him into a bulwark stiffener beam.He suffered serious injuries to his ribs and back.He was later medevacíd during increasing winds and seas.There were two other minor injuries to crew members in the galley and a stateroom.

Some of the conclusionsIncident #3: Communication failure

This ship departed Portugal on a winter afternoon headed to Houston, full away at 02:00hrs.The anchors were secured at 02:15hrs.

Three days later in the evening, the Chief Officer ordered the Bosun and an AB to retighten the securing lines on the anchors, which were heard contacting the ship's hull when seas struck the bow. During the rest of the night, moderate seas deteriorated to heavy weather, alarming the Chief Engineer, who reduced the speed of the ship about 01:30hrs. The Master was awakened about 04:20hrs due to the ship's heavy pitching.He went to the bridge to check on the weather and agreed with the officer on watch, Chief Officer, to further reduce the speed. The Master remained on the bridge for several hours in which he discussed with the Chief Officer the possibility of checking conditions forward for the safety of the vessel and securing the anchors. Nothing was agreed upon at that time. The Master returned to the bridge as the Chief Officer handed over the watch to the Third Officer at 08:00hrs.

At 08:20hrs the Bosun and two ABs were seen waiting for the Chief Officer,who had advised them they were to check the securing lines on the port and starboard anchors.Two additional seaman arrived, and the six men went forward onto the forecastle. They split up to tighten the lines on the anchors. At 08:40hrs two waves struck the ship so forcibly, the ship shook violently. As the vessel pitched into the first wave, one seaman was able to rush behind a deck tank and grab hold of ventilator trunk.He survived with minor injury.The othermen were slammed by the two waves and strewn across the forecastle deck about 20meters aft.The Chief Officer died, and an AB died later after rescue from the deck by his shipmates.The other ABs thrown by the waves suffered severe injuries.

Some of the conclusions

The tragic results of this last incident highlight the need for preparation for the unexpected. Always consider the power of the sea, and the practical ways to follow safety measures in heavy weather. Members should consider having a permanent list of items specifically identified for safety when on deck in heavy weather (Again, see the Code of SafeWorking Practices forMerchant Seaman). First and foremost,is the task absolutely essential for the safety of the ship and crew? If the answer is no, then wait for calmer sea conditions or the next port.

This is article is taken from the recent addition of Bodily Injury News, available

Operating in conditions of heavy weather

With reports of operators directing ships through the Straits of Magellan and round The Cape of Good Hope in order to save on canal dues and take advantage of the suppressed fuel prices, a reminder to Masters of the considerations that should be taken into account when operating in areas of adverse weather conditions. 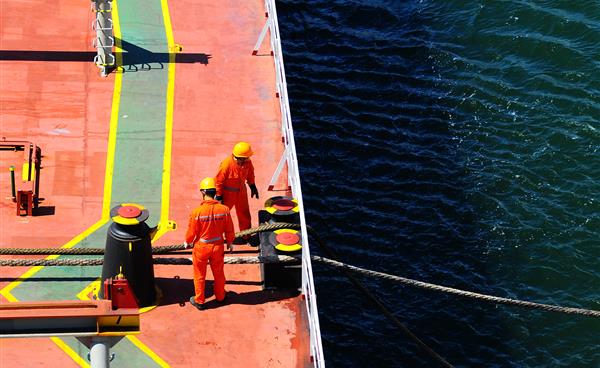