The Grounding of the Exxon Valdez

On March 24 1989, the VLCC Exxon Valdez (214,861dwt, age three years) was carrying about 200,000 tons of crude oil, and ran aground on Bligh Reef in the Prince William Sound of Alaska. Approximately 41,000KL of oil was spilled, which affected 2,400km of Alaskan coastline. This was the largest marine pollution crisis on the U.S. coast. The total cost of loss, inclusive of cleaning up operations, exceeded the amount of USD 2.5bio.  Following this accident, the IMO studied ways to prevent this type of incident from happening again. One result was tighter requirements for double hulls on tankers. 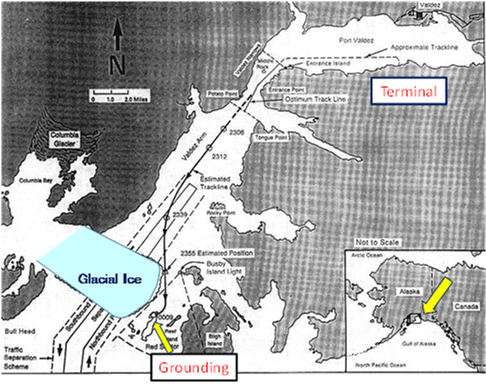 Figure 1: Area between the terminal and the grounding

2235 Exxon Valdez arrived at the terminal.

2020 The pilot boarded the vessel; two tugs were used.

2030 The master returned to the vessel.

2100 The master, chief mate and pilot started preparations on the bridge for departure.

2112 All mooring lines were removed and the vessel moved away from the berth.

2121 The vessel was clear of the berth and one tug started escorting the vessel.

2324 The pilot departed the vessel off Rocky Point.

2325 The master informed the Coast Guard Vessel Traffic Center (VTC)  that he was increasing speed to 16 knots.

2326 To avoid the ice floe in the vessel’s path, the vessel crossed the inbound lane.

The master informed the VTC that the vessel might depart the traffic lanes.

2331 The master again called the VTC regarding ice in the traffic lanes.

The course was changed to 200° and speed was reduced to 12 knots.

2350 As ordered by the master, the helmsman engaged the automatic pilot when the vessel’s heading was steady on 180° by pressing the Gyro button (according to testimony of helmsman).

2352 The master informed the third mate that he (the master) would leave the bridge to send messages and that he wanted the third mate to start returning the vessel to the traffic lanes when Busby Island Light was abeam to port.

The third officer determined that there was a distance of about 0.9 mile between Bligh Reef and the ice floe.

2355 The third mate took a visual bearing of Busby Island Light from the port wing when the light was abeam. He then plotted the fix on the chart.

2357 (estimated) According to the third mate, he ordered the helmsman to put the rudder to STBD 10°. He does not recall watching the rudder angle indicator to ensure that the rudder was actually applied. The third mate then telephoned the master to inform him that he (the third mate) had started to turn the vessel back toward the traffic lanes.

2359 The third mate noticed that the heading was not changing and ordered the rudder increased to STBD 20°.

0001 Although the vessel’s heading was swinging STBD, the radar indicated that the vessel was still following a 180° track. The third mate ordered hard STBD rudder .

0002 The master was notified of an emergency and then the ship contacted the bottom.

0009 The vessel ran aground (according to the course recorder printout). 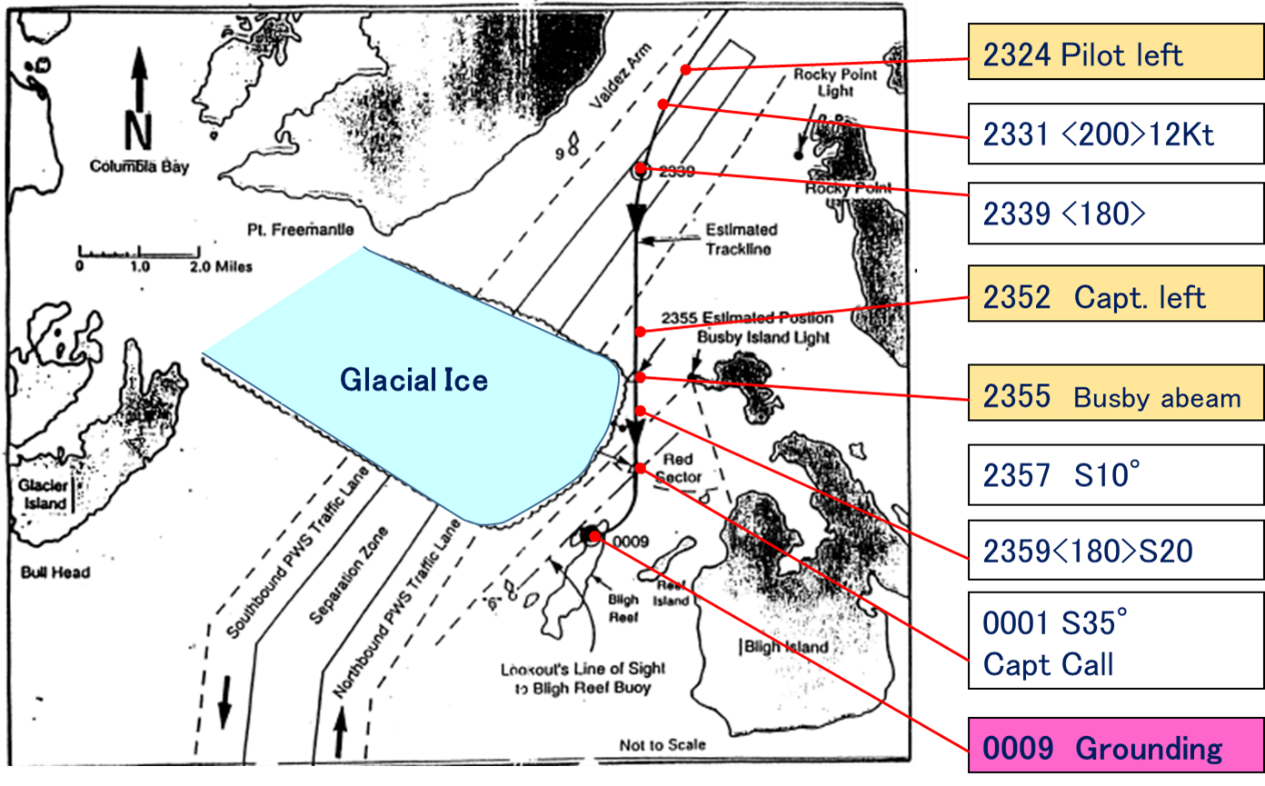 Figure 2: Course of the Exxon Valdez

Findings of the National Transportation Safety Board (NTSB)

The Exxon Valdez contacted the bottom and then ran aground about 10 minutes after the master left the bridge at 2352. Although there were many problems, as explained later in this report, this section takes a close look at the NTSB investigation concerning the events during these 10 minutes, which was the operation of the vessel that directly caused the accident.

2) Testimony of the helmsman

(Several days after the accident)

(The Safety Board public hearing)

There are several contradictions in the testimony of individuals involved with the accident. However, the NTSB reached the following conclusions concerning the activities of the 3/O.

The delay in starting the turn was most likely owing to inexperience in ship handling and piloting, fatigue, or both.

Many organizations and individuals associated with this accident were involved with the causes of the accident. This section examines only the unsafe action and the unsafe condition of the master and officers.

1) Actions of the master

Testimony by several individuals state that the master consumed alcoholic beverages (beer, vodka) while on shore. But the amount of alcohol consumed is unknown.

Marine Safety Office investigators who boarded the vessel after the accident at around 0335 smelled alcohol on the master’s breath when they met him on the bridge. The investigating officer described the odor as the very strong smell of stale alcohol. The investigating officer found two empty beer bottles discarded in the wastebasket in the master’s stateroom. Although it was not confirmed that the former were consumed prior of after the incident.

This information indicates that the master’s navigation instructions were definitely affected to some degree by alcohol.

The master returned to the Exxon Valdez 30 minutes before departure and immediately started preparations for the departure. There was no preliminary meeting about the passage plan with the officers and the pilot. Furthermore, after the pilot departed, the vessel left the Traffic Separation Scheme (TSS) due to an ice floe and entered the inbound lane. No actions (revision of course line on the chart or instructions to an officer) were taken concerning this change in the passage plan. This is one of the most critical problems among the numerous causes of the grounding.

A few minutes before entering the narrow channel, the master left the bridge and allowed the officer to navigate the vessel alone. This was strictly prohibited by, at least, safe/ good practices procedures and was a major cause of the accident.

Furthermore, when the master left the bridge, he did not give the 3/O any clear instructions.

The third mate gave the rudder order when he visually confirmed that the Busby Island Light was abeam to port. However, prior to the visual confirmation of the vessel’s position, the third mate was required to fix the vessel’s position to confirm any shift to port or starboard. Parallel indexing is one effective method to perform this confirmation.

One of the most important duties of the deck officer (and helmsman) is to use the rudder angle indicator to confirm that the rudder has been operated as instructed when changing the rudder’s position. Even on modern ships with high-tech navigation instruments, this confirmation is a golden rule of navigation.

Probable causes determined by the NTSB and recommendations

The NTSB determined that the following items are probable causes of the accident. Although the causes encompass many organizations, the causes are summarized very briefly as follows.

The NTSB issued recommendations to a large number of individuals and organizations involved in order to prevent an accident of this type from happening again. The following five recommendations were submitted to Exxon.

There were also many recommendations for other organizations.

The following is a list of significant recommendations for reference.

An examination of this accident reveals that causes were due to the flaws and negligence of a large number of individuals and organizations.

For the crew of a vessel, there are four main lessons.

“Bridge Team Management” (Nautical Institute), written by Captain A. J. Swift, lists the following eight items as causes of a grounding. All eight of these items apply to the causes of the Exxon Valdez accident.

There is no time limit on the value and usefulness of lessons learned by seafarers in the past.